FRC Mongolia has organized an international seminar “SME Finance Working group meeting” in collaboration with AFI – Alliance for Financial Inclusion. And this article was published on AFI’s Global web site.

First, there is tremendous diversity across AFI member countries in the level of account ownership, ranging from 6.4% in Niger to 91.8% in Mongolia. Although this is not the most surprising finding, what is interesting is that these differences were evident across low-, middle-, and high-income groups and within each of these groups, too.

Second, in 21 of the 70 countries, 51% or more of adults owned accounts. In 10 of the countries, account ownership reached or topped 71%, perhaps the highest levels in the AFI Network in 2014. Kenya stands out as the only low-income country to have more than 71% account ownership — all the others were lower- or upper-middle income countries. Kenya’s outlier status suggests that a low income level may not necessarily be a barrier to achieving a relatively high level of account ownership. Another interesting finding was that only Malaysia and Mongolia had account ownership levels exceeding 91% at the end of 2014.

Third, six of the 10 countries with a high level of account ownership (71% or higher) were classified as upper-middle income, while only one high-income member institution country, (Trinidad and Tobago) and two lower-middle income countries (Sri Lanka and Mongolia) fell into this category.

Fifth, in 49 (70%) of the 70 countries, account ownership was 50% or less. Approximately 43% of these were lower-middle income countries.

Overall, the data seems to suggest that some countries have been able to dilute the negative impact of low income on account ownership through smart policies and strategic approaches. This reaffirms the critical role AFI could play in advancing both account ownership and financial inclusion at the country level. 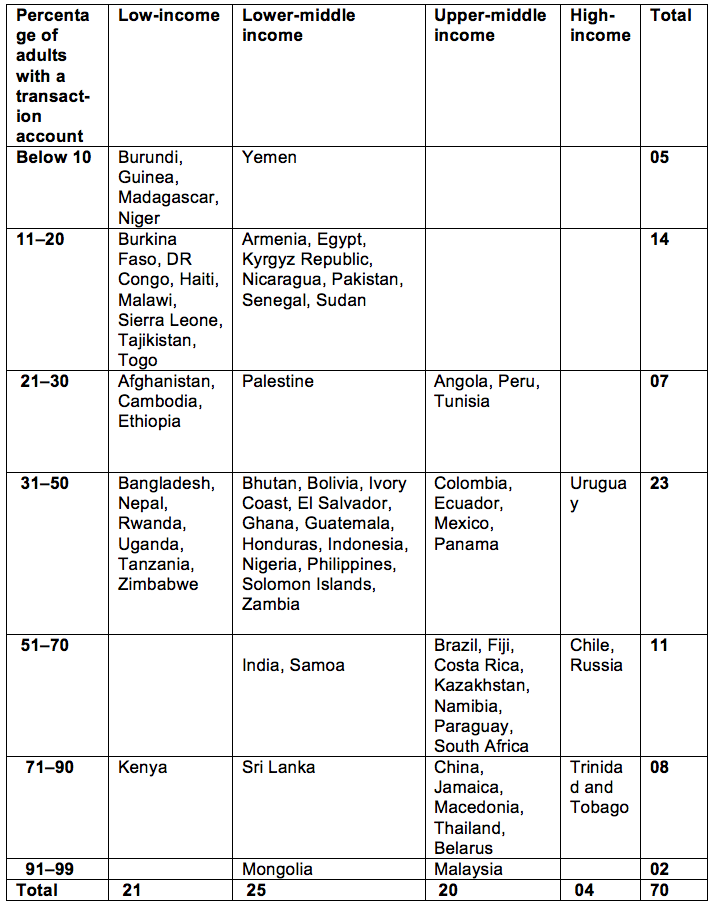 ABOUT THE AUTHOR
Nimal Fernando is a consultant at the Alliance for Financial Inclusion.

Advisor to the Chairman

Advisor to the Minister

Institute of Finance and Economics, Mongolia

By Government of Australia

The Best Economic journalist of year 2003

Institute of Finance and Economics

An independent overview and assessment on the public budget proposal of Mongolian Government in aspects of fiscal stability, policy priority, risk management and transparency.

Mongolia Publish What You Pay Coalition

Member of Managing board